The Tehran Metro (Persian: مترو تهران‎, romanized: Metro-ye Tehrān) is a rapid transit system serving Tehran, the capital of Iran. Tehran’s is one of the busiest metros in the Middle East and the cleanest in the world.[citation needed] The system is owned and operated by Tehran Urban and Suburban Railway. It consists of 6 operational metro lines (and an additional commuter rail line), with construction under way on three lines including west extension of line 4, line 6 and north and east extension line 7. 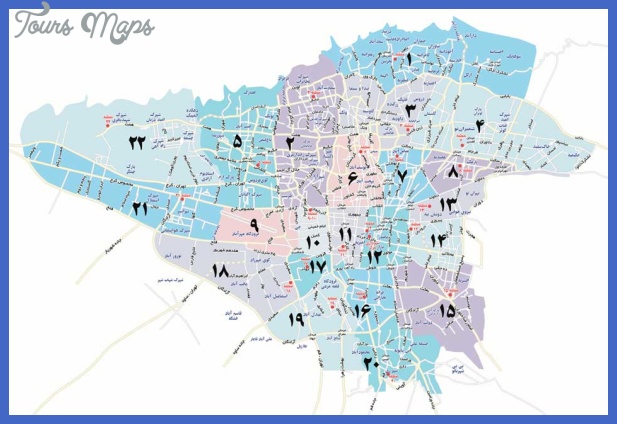 The line uses standard gauge and is mostly underground. Ticket price is 1000 Iranian Toman for each journey (about US$0.25), regardless of the distance traveled, but using prepaid tickets costs much less. Seniors may travel for free on the metro. On all Tehran metro trains the first and half of the second carriages from each end are reserved for women who do not wish to ride with men in the same car. Women can still ride other cars freely.[9][10]

Initial plans for the metro system were laid in late 1960s but could not be executed until 1982 due to socio-political issues such as the Iranian Revolution and the Iran-Iraq war. In 1970 the Plan and Budget Organization and the Municipality of Tehran announced an international tender for construction of a metro in Tehran. The French company SOFRETU, affiliated with the state-owned Paris transportation authority RATP, won the tender and in the same year began to conduct preliminary studies on the project. In 1974 a final report with a so-called 'street-metro' proposal was tendered. The street-metro system recommended a road network with a loop express way in the central area and two highways for new urban areas and an 8-line metro network which were complemented by bus network and taxi services. Geological surveys commenced in 1976. In 1978 construction on the line was started in northern Tehran by the French company, however this development was short-lived with the advent of the Iranian Revolution and Iran–Iraq War in 1979 and 1980 respectively. SOFRETU ceased operations in Iran in December 1980. On March 3, 1982, the Iranian Cabinet ministers formally announced the stop of Tehran Metro operations by the French company.

In 1985, the 'Tehran Metro Execution Plan' was re-approved by the Majles, the Iranian Parliament, on the basis of legal project of 'Amendment of Law of Establishment of Tehran Urban and suburban Railway Company' which had been founded on Farvardin 1364 (April 1985). This was a literal continuation of exactly the same project that had been laid out before the revolution. Work proceeded slowly due to the continuing Iran–Iraq War and often ground to a halt.

By the summer of 1985, urban pressure from the rapidly urbanising population, and lack of developed public transport system prompted the work to be resumed in earnest. 'Line 1' (From Blvd. Shahid Ayatollah Haghani to City of Rey) and its extension to Behesht-e-Zahra Cemetery was made a priority. 'Line 2' (From Dardasht in Tehran Pars district to Sadeghiyeh Second Square) and an extending towards the City of Karaj and Mehrshahr district was also made a secondary priority. /acid-music-studio-free-download-for-mac/. Studies were also made to establish the previously designed Lines 3 & 4. It was decided that an organisation by the name of the Metro Company should be established in order to handle the future development of the system.

Following this phase, the Metro Company was managed by Asghar Ebrahimi Asl for eleven years. During this time, hundreds of millions of dollars were spent on the system and the Metro Company was given government concessions for the exploitation of iron ore mines in Bandar Abbas (Hormuzgan Province), exploitation and sale of Moghan Diotomite mine in Azarbaijan Province, export of refinery residues from Isfahan oil refinery as well as tar from Isfahan steel mill [1]. The year after Asghar Ebrahimi Asl left the management of the Metro Company and Mohsen Hashemi succeeded him, the first line of the Tehran Metro was launched between Tehran and Karaj.

On 7 March 1999, an overland Tehran-Karaj express electric train started a limited service of 31.4 km (19.5 mi) between Azadi Square (Tehran) and Malard (Karaj) calling at one intermediate station at Vardavard. The line was constructed by the Chinese company NORINCO.

Line 5 of the Tehran metro began operating in 1999 and was Iran's first metro system.

The Metro uses equipment manufactured by a wide range of international companies: double-deck passenger cars for the Tehran-Karaj regional line are supplied by CRV (although some trains are from SEGC) via CNTIC and assembled by the Wagon Pars factory in Arak.

As of 2010 approximately $2 billion has been spent on the Metro project. The Tehran Metro transports about 2.5 million passengers daily[11] through its 7 operational lines (Lines 1,2,3,4,5,7,8). It also has additional one line under construction (Line 6), and an additional two lines in engineering phase. New 80 wagons have been added to the system in September 2012 to ease transportation and reduce rush-hour congestion. Iran is able to produce its need in wagons and trains independently.[12]

Line 1, coloured red on system maps, is 28.1 kilometers (17.5 mi) long, of which 14.9 km (9.3 mi) are underground (from Tajrish station to Shoush-Khayyam crossing) and the rest runs at surface level. There are 29 stations[17][18] along this line of which 22 stations are located underground and 7 above ground. As of 2018, the total capacity of line 1 is 650,000 passenger per day, with trains stopping at each station for 20 seconds. The trains are each made up of seven wagons, with a nominal capacity of 1,300 seated and standing passengers. The maximum speed of the trains is 80 km/h (50 mph) which is tempered to an average of 45 km/h (28 mph) due to stoppages at stations along the route.

Line 1 runs mostly north-south. A 4.1 kilometers (2.5 mi), three station extension of the line from Mirdamad station to Qolhak station opened on May 20, 2009.[citation needed] The 4 kilometers (2.5 mi), four stations second phase of this extension from Qolhak station to Tajrish Square was completed in 2011. Construction was to be completed by March 2007 but faced major issues due to large boulders and rock bed in part of the tunnels as well as water drainage issues. It has also faced major financing issues as the government has refused to release funds earmarked for the project to the municipality.

Since August 2017, one of Line 1's stations, Darvazeh Dowlat is open 24 hours a day, in order to accommodate passengers traveling to and from Imam Khomeini Airport via Line 1.[27]

Line 1 connects Tehran to Imam Khomeini International Airport. Its first phase, to Shahr-e-Aftab station, opened in 2016, and the airport station opened in August 2017. It is the only metro line in Tehran that is completely open 24 hours a day (even if the frequency is only 80 minutes..), in order to accommodate passengers from late night and early morning flights (Line 1's Darvazeh Dowlat station is the only other metro station outside of Line 1 with that classification).[27] A third phase, which is currently under construction, will extend Line 1 to the satellite city of Parand and bring the total length of the line to 50 km (31 mi). Its 120 km (75 mi) per hour speeds classify it as an express subway line, the first of its kind on the Tehran Metro.[28]

The line was extended from Imam-Khomeini to Baharestan Metro Station in 2004, and to Shahid Madani, Sarsabz and Elm-o-Sanat University in March 2006 with the intermediate stations, Darvazeh Shemiran and Sabalan, opening in July 2006.[29] It was extended further from Elm-o-Sanat University to Tehran Pars in February 2009, and to Farhangsara in June 2010.[29] The extension phase to new east terminal is under construction.

The line is 22 km (14 mi) long with 18 stations.[22] which connects the western part of Tehran to eastern part. This line initially runs through Ekbatan (western Tehran) to Kolahdooz (eastern Tehran). The construction of a western extension to line 4 has been started in 2012 connecting Ekbatan to Chaharbagh Sq. This extension included 3 stations. A sub-line of this line connects Bimeh station to Mehrabad Airport. This sub-line has 2 stations at Terminal 1&2 and Terminal 4&6.

Currently there are 19 stations in operation on Line 4, coloured yellow on the system maps.[30][33]

This line is coloured green on system maps; it is a 9-kilometer-long (5.6 mi)[23] with a first section from Shohada Square to Dowlat Abad were opened on April 7, 2019[34]. When completed this line is 9 km (5.6 mi) long with 3 stations as it connects southeast Tehran to northwest. A tunnel boring machine (TBM) is used to construct the tunnel. TBM is using earth pressure balanced method to pass safely through urban areas without considerable settlement.

This line, similar to line 6, and in contrast with line 3, goes from northwest to southeast and was constructed with modern TBM machines. Its first phase, compromising of 18 km (11 mi) of line and 7 stations were opened in June 2017.[35] This line have 22 km (14 mi) with 10 station right now.

All routes have been equipped with automatic train protection (ATP), automatic train stop (ATS), centralized traffic control (CTC), and SCADA. More and more residents use the metro due to the improvement in the peak-hour headways, the opening of more stations and overall improvement with new escalators, elevators, and air-conditioning in the trains.

On 18 July 2007, a twenty square metres area immediately adjacent to the entrance of the Toupkhaneh metro station caved in. There were no casualties, but the station had to undergo numerous repairs.On 15 April 2012, safety walls of Mianrood River broke due to heavy rain in Tehran, and consequently, 300,000 cubic meters of water entered metro tunnel of Line 4. The two nearest stations were still under construction, so Metro operators had enough time to evacuate other stations from passengers. Nobody was killed, but water depth in the Habib-o-llah station, the deepest station on Line 4, was estimated to be near 18 meters. It took nearly two weeks to reopen the flooded stations which were previously in operation.[36]

The Cultural Heritage Organization of Iran has complained that the vibrations caused by the Metro were having a significant and highly adverse effect on the Masudieh Palace in the Baharestan neighbourhood of central Tehran.[37] The Cultural Heritage Organisation has also complained about vibrations near other historic sites such as the Golestan Palace and the National Museum of Iran. However, engineers and technical experts believe that it is the noise that induces the false sense of vibration and like many metro systems in large cities, no untoward impact is probable.

Another major complaint is the lack of a transfer station between lines 2 and 3. This lack has passengers having to transfer to line 4, travel a few stations along this highly congested line, and transfer again.