Rune Factory: Tides of Destiny, known in Japan and PAL regions as Rune Factory: Oceans (ルーンファクトリー オーシャンズRūn Fakutorī Ōshanzu), is a Wii and PlayStation 3 role-playing game in the Rune Factory series, developed by Neverland. It is published by Marvelous Entertainment in Japan, Natsume in North America, and Rising Star Games in Europe and Australia. Players control a male and female character in one, the male side named Aden and the female side named Sonja, as they traverse the seas on a giant beast named Ymir. The beast can raise sunken islands and ships from the sea. Players are able to farm, fight using a real-time battle system, and form relationships. The game was released on February 24, 2011 in Japan, October 7 in North America, May 25, 2012 in Europe (PlayStation 3 only), and June 13, 2012 in Australia (PlayStation 3 only).[1]

The PlayStation 3 version of the game supports the PlayStation Move motion controller and is the first instance of a Rune Factory title appearing on a Sony home system. North America publisher Natsume picked up the localization rights to the game. The game was set to be released on September 27, 2011,[3] but was pushed back to October 7.[4]

The two main characters are Aden and Sonja, and the player will be encountering many people such as Lily, Odette, Violet, Bismark, James, Joe and many more.

The Wii version received 'generally favorable reviews', while the PlayStation 3 version received 'mixed' reviews, according to the review aggregation website Metacritic.[16][17]Nintendo Power praised the Wii version, noting its graphics, voice acting, and 'compelling' plot.[10] In Japan, Famitsu gave the game a score of three eights and one seven for a total of 31 out of 40.[5] 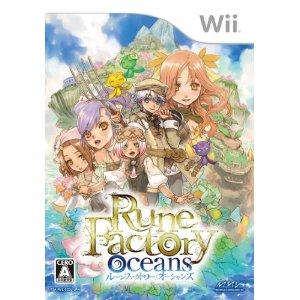