This guide show how to modify your sprites so that you don't have a client
side after cast delay anymore. Thats useful to spam Sonic Blow for example.
Here is a video to it:

At first, make a Backup of your data.grf before you mess up something.
Open your data.grf with Gryff,
File -> Open -> select your .grf file
Once its open it should look like this:
Now you have to extract the Sprite models and the .act files, they are located at
data/sprite/인간족/몸통
male - 남
female - 여
You can extract them one by one or over the treeview. Extracting a whole
folder is a bit buggy, thats why i uploaded them .
Alright, once you extracted your desired sprite with the .act file you have to rename them because there are problems with korean letters, but don't 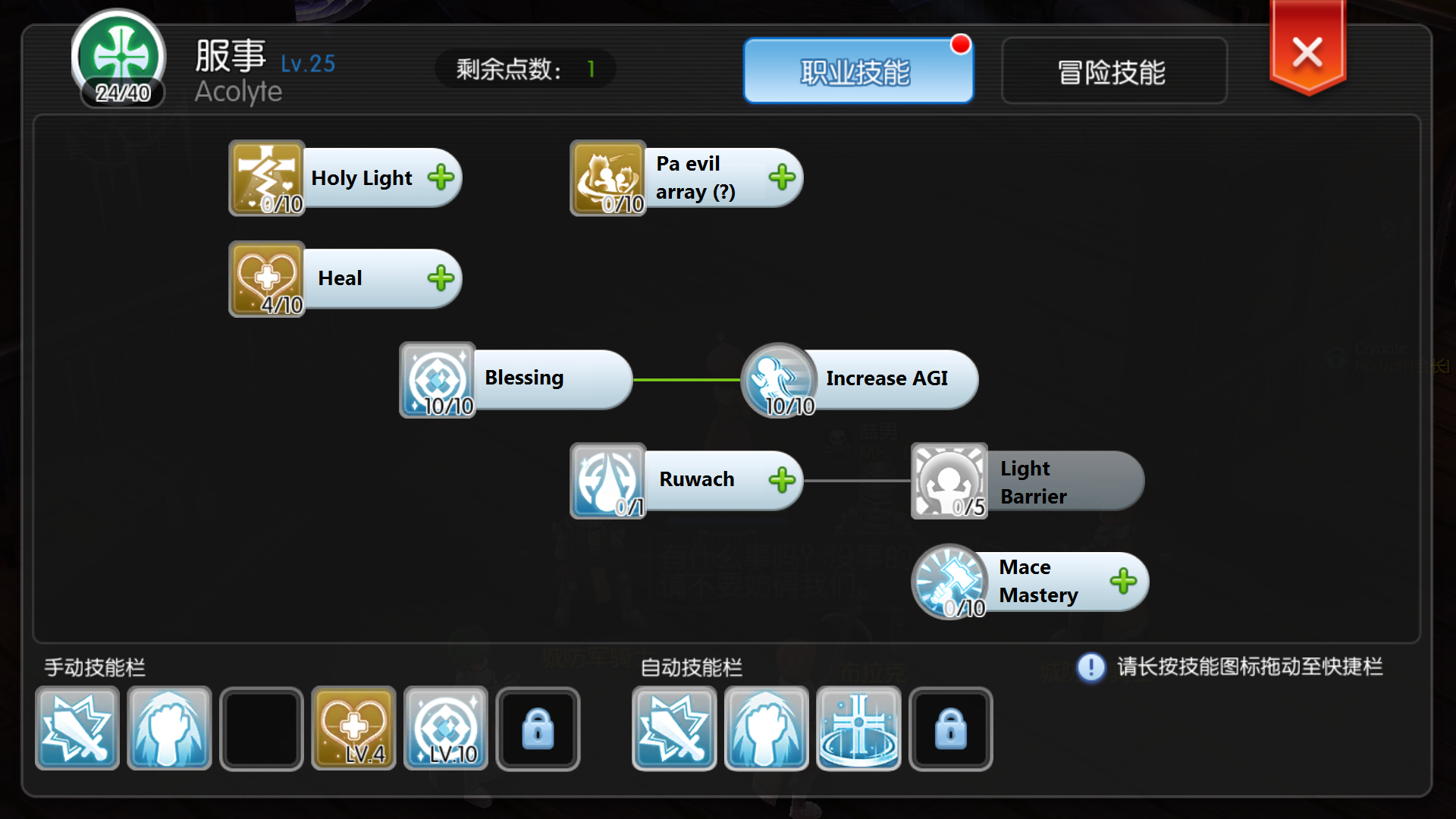 forget to save the origin name somewhere, like in a text file.
Now you are able to open them with actOR (be sure your full path don't
include any korean characters)
File -> Open -> sprite
Should look like this, i took the High Priest for example.
Now we have to remove the frames thats used for the skill animation, leaving
the first (otherwise your RO client will crash).
Over the direction field is the action selector, search the one thats used for
skills, for the Highpriest its act12. If you arn't sure if you have selected the
correct one just play the action and you will see it.
Once you picked the correct one open 'Edit Frame..' at the menu bar, a new
window will pop up. Select the first option and remove all frames EXCEPT the
first. You now should have one frame left, if you play the action nothing happens. You have removed the frames for the front side now, but you are missing 7
more sides , just chose another direction at the middle of the window and
redo the same as before.
Now you should save the sprite and the act. Just save the sprite over the
menu bar, but attention: I got errors as i saved the act file over the menu bar
too, so just close the program, a prompt will pop up and ask if you want to
save the .act file.
After you saved everything, rename them to the origin name. Go back to the
directory where you extracted your sprite and add your new one, you can

simply overwrite it AFTER you made a backup of it.
rightclick into the file list -> Add File(s)
Just to remember:
data/sprite/인간족/몸통
male - 남
female - 여
The last step is to save the .grf file (Ctrl + s) and be happy.
remarks:
You may have to edit more then one frame for skill animations
credits goes to me (Mankana)
If you don't like my rough english, fuck you

Skills in Ragnarok Online are special actions a player can perform depending on his/her Job Class. There are two types of skills: Active and Passive. Active skills can be manually activated by the player, where some of them remain active for a set period of time, others can be manually deactivated, and some are one-time-use skills that require manual activation each time the player desires to use them. Passive skills are always in effect, they do not need input from the player to provide its benefit as long as the player has learned those skills.

The skill usage is performed through the following phases:

During Cast Time, the character cannot move, attack, or use other skills. If the character takes damage during Cast Time, the skill is canceled (exceptions: wearing a Phen Card or Bloody Butterfly Card, being Sacrificed by a Crusader/Paladin/Royal Guard, or while casting certain skills). If a skill has no base Cast Time or modifiers reduce the effective Cast Time to 0 or less, no cast gauge appears and this phase is skipped entirely.

Cast Time is indicated by a 'progress gauge' above the character's head, sometimes called 'Cast Bar'. The gauge starts out black and is filled with green as Cast Time proceeds. When the cast bar is completely green, Cast Time ends. Some skills do not have a cast bar, even though they have a casting time, such as Bowling Bash and Brandish Spear.

Cast Time is composed of 'Variable Cast Time' (VCT) and 'Fixed Cast Time' (FCT). As the names may imply, VCT depends on the stats and gear of the caster, while FCT is constant for a given skill. A small number of effects can reduce FCT. Effects which reduce FCT by a percentage do not stack; effects which reduce FCT by a set amount do stack, and are applied before percentage modifiers. For most skills, FCT is 20% of the total Cast Time, with the remainder being VCT.

VCT is reduced by DEX, and also INT at half the amount.

Some examples how all VCT could be reduced:

Cast Time is only calculated once. It ignores changes to the modifiers during casting. This means it is possible to start casting and equip a Phen cardedaccessory afterwards to get the anti-interruption effect for most of the casting without the VCT increase.

During Cast Delay (or Global Skill Delay or After-cast Delay), the character can move and attack freely, but cannot use skills. There is no visible indication of Cast Delay except the grayed out skill icons of all skills in the Hotkey bar.

During Cooldown (or Skill Re-use Delay), the character can move and attack freely, but cannot use the same skill again. There is no visible indication of Cooldown except the grayed out skill icon of the just used skill in the Hotkey bar.

Almost all 1st and 2nd Class skills have no Cooldown.

A character's skills can be reset in a few ways: