Panipat, January 22 An employee was killed while four others, including a deputy manager, were injured in a blast in the naphtha cracker plant (NCP) on the premises of the Indian Oil Corporation Refinery and Petro Chemical Complex at Baoli village in the district today. Panipat, July 25 A fire broke out at the swing unit of Naphtha Cracker plant in the Panipat Petrochemical Hub of the Indian Oil Corporation today. Sources said five persons, including Fire Officer BB Chauhan, sustained injuries while dousing the fire and six others were affected due to the gas leakage. Details and description of Panipat Naphtha Cracker Project. Indian Oil’s Panipat Naphtha Cracker Secures top ranking in international benchmark study Internal Stream Factor (ISF) is an indicator of the plant downtime caused by unscheduled shutdowns or interruptions for internal reasons.Similarly, Specific Monomer (Ethylene) Consumption is an indicator of the raw material consumption to produce one.

(View Pics)Rolling out the canvas for expansion of its operations through downstream integration into petrochemicals, India’s largest Naphtha Cracker plant at Indian Oil’s Panipat Complex was today dedicated to the Nation by Union Minister of Petroleum and Natural Gas, Shri S Jaipal Reddy.

Speaking on the occasion Shri Reddy said Naphtha Cracker is commissioned in 46 months, which compares with the Global standard for similar capacity plants and is ahead of average time taken in setting up similar units in India. Also, With the completion of the Petrochemicals Complex in Panipat, IndianOil has crossed a major milestone in realizing its aspiration to emerge as an integrated and diversified company.

The minister said Indian Oil has transformed from being a pure petroleum company to becoming a global energy player with a vision to become a globally admired energy leader as with capacity expansion of 1.5 MMTPA at Haldia and 3 MMTPA at Panipat, the refining capacity of IndianOil has gone up to 54.2 MMTPA and group refining capacity has increased to 65.7 MMTPA – making IndianOil the nation’s No. 1 Refiner. Shri Reddy expressed the hope that with the commissioning of Grassroots Refinery at Paradip in 2012, the Group Refining capacity will further increase to 80.7 MMTPA and Indian Oil will continue to be the key leader in refining.

The Petroleum Sector in India is acting as a light-house to development. It provides the true impetus to progress and prosperity. Petroleum and Petrochemicals have been the indicator of growth of nations across the globe. 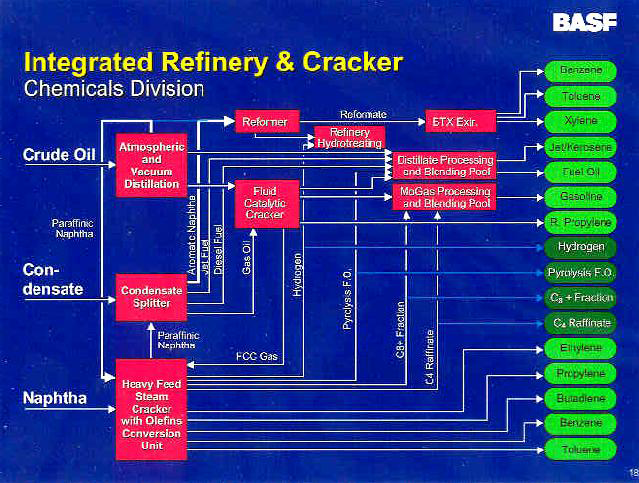 The Naphtha Cracker Complex built at a cost of Rs.14,439 Crore will provide significant impetus to India’s leading Fortune-500 Company’s ambitious foray into petrochemicals. The naphtha cracker is designed to produce 800,000 TPA of ethylene. The naphtha would be sourced from Indian Oil’s Gujarat Refinery in western India and Panipat and Mathura Refineries in north.

This is a complex project comprising of above mentioned five process units along with other associated Units. To meet the utilities requirement a 239 MW Captive Power Plant; state-of-the-art Effluent Treatment Plant, three cooling towers of 144,000 M3/hr capacity, N2O2 Plant, Water Treatment Plant with capacity 5,600 M3/hr and ultra modern lab facilities for chemical and polymer testing have been set up. The entire Cracker Complex has around 2,925 equipments, 100 storage tanks, and involved around 1,600 KM of piping and 8,000 KM of cable laying. Around 119,000 MT of steel and 220,000 MT of cement have been consumed in the project.

The Panipat Refinery, IndianOil’s seventh and technically advanced Public Sector refinery of lndia is today one of South East Asia’s largest integrated petrochemicals plants. Panipat Refinery meets the demand of petroleum products not only of Haryana but also of the entire North-West Region including Punjab, J&K, Himachal, Chandigarh, Uttaranchal state and part of Rajasthan & Delhi.

The original refinery with 6 MMTPA capacity was built and commissioned in 1998 at a cost of Rs. 3868 crore (which includes Marketing & Pipelines installations). The major secondary processing units of the Refinery include Catalytic Reforming Unit, Once Through Hydrocracker unit, Resid Fluidised Catalytic Cracking unit, Visbreaker unit, Bitumen blowing unit, Sulphur block and associated Auxiliary facilities. In order to improve diesel quality, a Diesel Hydro Desulphurisation Unit (DHDS) was subsequently commissioned in 1999.

Panipat Refinery was built using global technologies from IFP France; Haldor-Topsoe, Denmark; UNOCAL/UOP, USA; and Stone & Webster, USA. It processes indigenous and wide range of imported grades of crude oil. The Refinery caters to the high-consumption demand centres in North-Western India including the States of Haryana, Punjab, J&K, Himachal, Chandigarh, Uttakhand, as well as parts of Rajasthan and Delhi.

The Union Minister for Petroleum and Natural Gas, Shri Jaipal Reddy dedicating the Indian Oil�s Panipat Naphtha Cracker to the Nation, at Panipat, Haryana on February 15, 2011. The Union Minister for Housing and Urban Poverty Alleviation and Culture, Kum. Selja, the Chief Minister of Haryana, Shri Bhupinder Singh Hooda and the Minister of State for Petroleum and Natural Gas and Corporate Affairs, Shri R.P.N. Singh are also seen.

Naphtha Cracker Plant In The Philippines