It's time to don the sheepskin coat, get the teacups ready for the half-time rant and settle down in the virtual dugout for a lifetime of agony and ecstasy. The latest version of Championship Manager is upon us, and it is, to be fair, an update of last year's superb edition. But for those whose heads have been buried in the sand, here's a brief recap on the CM phenomenon.

It is now ten years since the game first appeared on the old Commodore Amiga, packed into three floppy disks. Even then, it was an all-consuming management game, with a level of detail and involvement never before seen. CM has since evolved to include more leagues, more information, more statistics and greater tactical control, but even after a decade of updates, at its heart CM remains the same addictive-as-hell game with a cast iron guarantee of hours, days, weeks, months of anguish, tension and sheer enjoyment. The game can become an obsession. You think it at work or in the car, wondering if Michael Bridges can cut it at the top level or just how long can Teddy Sheringham compete in Premiership ('no' and 'two seasons maximum' are the answers).

CM is also a breaker of homes - just ask my missus after she hasn't heard from me for six hours and another essential DIY project is left undone for another weekend. This is because CM is the nearest I will ever get to emulating Sir Alex, Martin O'Neill and even, because I am a glutton for punishment, Barry Fry.

So we've established Sports Interactive's title is the greatest management sim ever, and for many, the greatest PC game ever. But what about the nuts and bolts - how do you turn Southend United into Real Madrid? How do you keep Doug Ellis happy without spending any cash?

Well, you take over a team (from any one of about 20 countries), pick a squad, train them, select a tactical system that works and then pick the side and watch them play - in an exciting, text-only way of course.

To complicate matters there are injuries, transfers, money matters, player contracts, demanding chairmen, demanding fans, demanding players and their evil agents, the media poking their noses in, the FA and of course other managers, like Sir Alex, tapping up your best players. If you need to know any more about the nuts and bolts, we'd suggest you check out the review of CM 00/01 (or even the original Championship Manager 3 release) - after all, this is essentially the same game with a few add-ons.

What the already initiated among you will want to know is what's changed since last time. The most obvious is the new player database. Well, it's only about three weeks behind - Stam has been kicked out of United, Dean Richards is at Spurs, but Peter Taylor has not been sacked by Leicester yet. Foxes fans need not fret, however, as the database editor allows every statto/saddo to keep their files up to date, and for the rest, the first few updates should be available on the Internet shortly.

As well as the database being up to date, so is the transfer system - a few weeks into the first season, a new UEFA directive, which is far too complicated to go into here, comes into force. There are wordy, on-screen explanations, but basically there is less of the Bosman free-for-all approach to transfers and smaller clubs are more likely to be financially compensated for the loss of a key player.

The teams are represented in almost too much detail - take over Manchester United, Inter, Bayern Munich or Real Madrid and the board will want the Champions League, but you'll have pots of cash. Celtic or Rangers want the Premier League and a good show in Europe. The chairmen on the middle ranking side (like Spurs, Aston Villa or Newcastle) will want a UEFA Cup place, but you'll have a limited transfer fund and really need to sell to get any quality in.

Anything lower and the quest becomes survival with very limited funds, and more often than not, a huge debt that needs to be cleared before any new players can be bought - only 35-year-old pros or teenage hopefuls are usually available for free. The point is it now seems harder than ever to get a team to rise above itself and outperform its initial 2001/02 standings - I should know as I got Spurs into the Inter Toto Cup in my first year but still got the sack.

That brings me on to the first main modification - manager power. Fed up of chairmen giving you the brush-off? 'There's no money available,' they used to say. 'You run the team and we'll sort out the cash,' they patronisingly offered. Well, now you can deliver a 'back me or sack me' ultimatum. And in an eerie echo of the George Graham sacking, I demanded Spurs to put their short arms into their deep pockets to fund our Inter Toto campaign - and was dumped on the spot. Thankfully, I was rescued from the jobseekers queue by a plum job at Chesterfield.

A similar feature allows you to appeal to the FA against a sending off - do it once and you might get a key player's ban reduced. Do it too often and you'll get a reputation as a whinger and never be taken seriously again.

The optional attribute-masking mode is a great addition, which sometimes prevents you getting a full run-down of a player's abilities. You might know if he's a good header of the ball, but his determination, work-rate and stamina will be a mystery, until your scouts have had a good look at him. The football world is packed with examples of players who were not scouted properly and came a cropper - remember Savo Milosevic of who Aston Villa manager had only seen a compilation video of him in action. And there was the embarrassing matter of the new 'George Weah' picked by Graham Souness at Southampton who had to be pulled off after five minutes because he quite clearly hadn't a clue. The same applies now - scout the players first, then buy.

You can also have the scouts watch your next opposition. Do this and in the run-up to each match you get an automatic run-down on the other side - their preferred formation, how they play and who the key players are. Being told that Michael Owen is out injured is a big help.

Comparing two players side-by-side on screen to see who's best is also possible now. Some might find this useful, but after a few comparisons, we didn't really bother with it and would not miss it. Likewise the new memo system, which allows managers to put reminders on a players file, such as to renew a contract or look at a transfer prospect. The only modification we have yet to come across in our first three seasons is to send a player away for surgery on recurring injuries. Despite having a sicknote Anderton in and out of my team, my physio never once suggested he go away for this miracle cure. 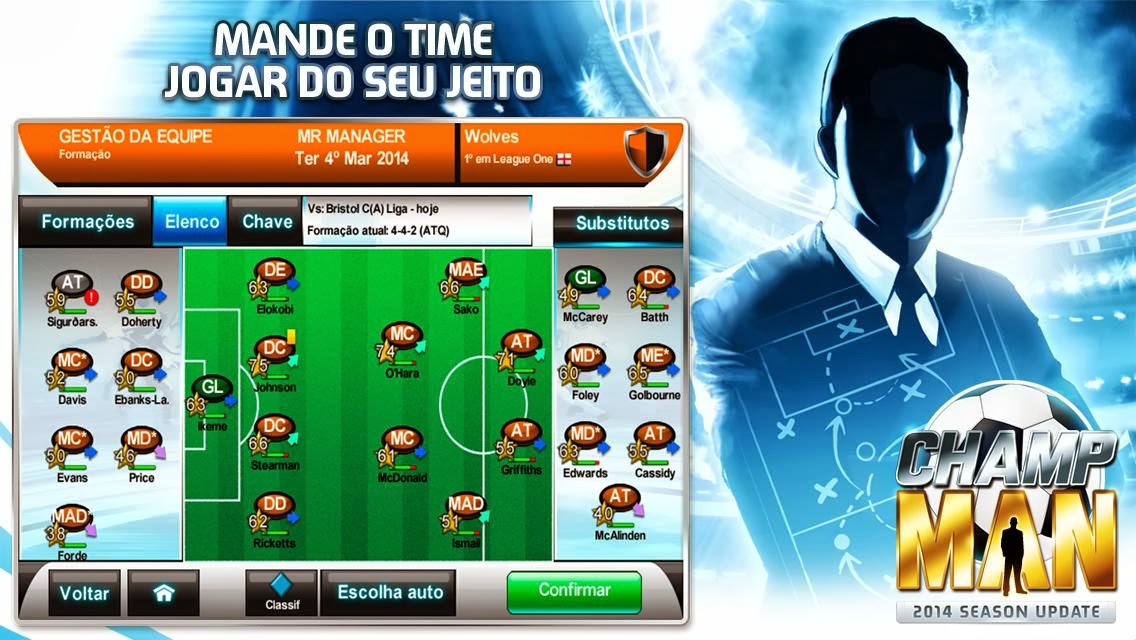 The good and bad

As you can see, there are some great and some not so great little add-ons and improvements, but they are just that - little add-ons. In reality, this could be delivered as a patch for the CM00/01 edition; player updates are freely available on the web anyway and while the ultimatum, scouting and attribute-masking features improve the game, you can live without the other tweaks. At least they take nothing away from the previous incarnation.

As a stand-alone game, this is CM and superb as always. But there really is little reason to pay another £20-£25 for this if you already own CM00/01. However, as the game is so damned addictive and has a large following, we doubt Eidos or Sports Interactive will have any trouble shifting these by the barrowful. [Not to be accused of stating the obvious, this last line was written shortly before the companies' October 16 announcement that CM 01/02 has become the UK's fastest selling PC game of all time. - Ed]

Get the additional patches and data updates here: http://www.champman0102.co.uk/downloads.php.

why i man , me and the lads get rite chuffed and the like when wees win the cup ,
if only it were lke that real life and that like .

Hi Guys, is it just a cast of downloading the file zip file and then playing?

Classic, Finally got a move to a big club and won Division 3 with Posh!!

HSS I have the same issue. How did you resolve it?

I've downloaded Championship Manager 01/02.. how do I bypass the lack of a CD.. I've also downloaded the MagicISO program, but no luck.. there doesn't seem to be an .ISO file.. Please help

Still the best football management simulation around! Me and Johan Cruyff still play this game today, with me being Spurs and him being Ajax. I still refuse to sign Paul Gascoigne though, even if Mystic Meg advises me to.

Still love this game - it's never been bettered. Me, Des Walker and Steve Bull all go round Des's at least one a week for a network game (Bullie insists on bringing and playing on his own computer as it's the only one he's ever had & be doesn't trust anyone elses.)
It's brilliant, but they're always winding me up, telling me every goal scored against me was a deflection off my own boot. Bastads!

Championship Manager 01/02 is still the best, way better than anything before or since. Me, Des Walker and Paul Parker like to have a network game at least once a week. Des is always Forest, Paul is QPR & I'm always Wolves.
We sometimes wind up Paul when he's not watching, & tell him that the commentary had just said that there's been a goal scored against him, coming off a deflection from his own boot, haha.

This is the best football management game ever. Me and Peter Shilton & Stuart Pearce still play this today, every Sunday. We all go round Shilt's house to play, as he's getting on a bit & doesn't really understand what to click on etc, so we help him out.
I'm always Ipswich, Pearcy is Forest, & Shilts is Leicester. Pearcy always brings some of his home-made fairy cakes, which is nice.

This is the best footie management game, to this day! I still play this with Gary Lineker sometimes, network game, when he's not playing with Barnsey, Waddle & Beardsley. He's not keen on playing with them, so sometimes he tells them he's tired after Match Of The Day the night before, & we have a game. We like to play abroad & accustom ourselves with the different styles of play in different countries.

This is the best footie game ever. Me, Chris Waddle & John Barnes so play this every Sunday - network game like. Have done since it came oot.
We always make Barnsey play as Watford (haha) coz I wanna be Liverpool, & then Waddle can be Newcastle. When Lineker plays we let him be Tottenham. Classic game!

Me and Barnsey & Peter Beardsley still play this game, every Sunday via network linkup. Sometimes Lineker joins in, but he's usually knackered after Match Of The Day.
I like to be Newcastle, but so does Peter, so he tries to be Liverpool, but Barnsey wants to be Liverpool. We usually make Barnsey play as Watford haha!
Lineker opts for Spurs, or ponces off to be some Japanese team.

Share your gamer memories, help others to run the game or comment anything you'd like. If you have trouble to run Championship Manager: Season 01/02 (Windows), read the abandonware guide first!

We may have multiple downloads for few games when different versions are available. Also, we try to upload manuals and extra documentations when possible. If the manual is missing and you own the original manual, please contact us!