Environmental Determinism and Possibilism:
Shaping and Reshaping Life Since the Beginning of Time
Possibilism and Environmental Determinism, both completely different in theory, and yet so very linked in purpose. Environmental Determinism is the idea that the environment shapes its inhabitants, and will --or will not-- provide for them to accomplish their goals. While Possibilism is the idea that mankind –for this example it will be routinely mankind and not another species—can accomplish their goal(s) because it is possible or could become possible with assistance, such as training, tools, equipment, specialized environmental gear, etc. These two ideas can be almost as conflict-ridden as Creationism and Evolution, with both sides of the fight drawing lines in the sand and rallying behind them. Hopefully the reader of this essay will find that Environmental determinism and Possibilism may have different theories, but are not so different when considered towards a problems beginning and ultimately its end. Examples of Environmental Determinism could be tropical viruses that cannot flourish outside tropical zones, bananas and their inability to thrive naturally in Vermont, humans not being able to breathe under water, and amusingly: pigs not being able to fly. All of these examples are limited to where and what they can do because they cannot escape their environment, as it has shaped them as much as they it. Humans are a terrestrial species, meaning we live and exist on solid land above sea level. Our bodies have shaped themselves to this environment and we will shape the environment back to continue this trait, thus the chances of humans developing gills for water breathing are ridiculously unlikely without a decidedly massive environmental change and a possibly forced evolution to adapt to said new environment. Being concerned with environmental changes and the need to change or adapt, the theory of Possibilism comes into view. Possibilism revolves around using what is available, and with ingenuity and/or technology making it accomplish what was previously impossible. Possibilism could be a skillset that “MacGuiver” used frequently, as he would accomplish great feats with the available resources and creativity. Possibilism for the previous tropical virus could involve mutations, or its hosts living in less hospitable regions –such as Siberia- but within selective habitable environments like hospitals and other areas that remained relatively temperate. Sometimes it is not about adapting to the environment and thriving, but surviving long enough until you can stabilize or at least live. Man was not made to breath water and live under the oceans, its currently impossible. Yet through the use of diving equipment and specialized living environments and vehicles, mankind can temporarily swim among the fish and live among the currents of the seas. Once the temporary assistance is not needed or has been fully integrated and is now a permanent art of the solution and the normal environments, Environmental Determinism will return and set the rules again until the next required changes. Environmental Determinism can be viewed as a beginning, like creationism, where it shapes and molds its creations to the confines of the strict, limited or only environments allocated. But Possibilism is part of the problem solving portion, where the creation adapts to new environments or factors, failing or thriving until it ultimately dies or thrives under pressure. Those individuals and groups that survive and thrive, akin to the idea of evolution per se, will than pass on their skills to the following generations until a new factor arises and the whole cycle repeats again. 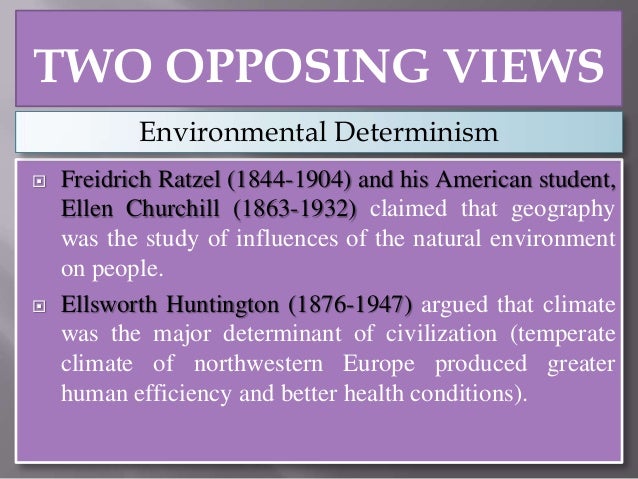 American geography. Book, The Influences of Geographic Environment. Terminism is cultural determinism, or possibilism. In this view. The paradox in environmental determinism and possibilism: A literature review. The concept of geography by itself and determinism was promoted by non-geographer.