Would Pagan have a release date for its titles. As it was said Blair did all the work on this one. Could we expect to see this out this year. Also, what has happened to the Unspeakable Oath. And, any news on the PDF reprints front? Could we have a general state of the union address from the good. Call of Cthulhu. 1920s Investigator. (PDF) Blood Brothers. The adventures in Mysteries of Mesoamerica are really three semi-connected stories and one outlier. The Mysteries of Mesoamerica and other Pagan titles - posted in Cthulhu General. The Mysteries of Mesoamerica and other Pagan titles. Mysteries of Ireland is a source book for the Call of Cthulhu roleplaying game. It is a guide for playing games and running scenarios in 1920s Ireland. This book contains information on life in Ireland during this period and includes Irish Myths, Legends and Superstitions, the Occult, and the Mythos.

One of my favorite Cthulhu Mythos stories is 'The Mound,' a short novel conceived by Zealia Bishop and published with her name appearing as that of the sole author. Yet we all know that this tale is primarily the work of H.P. Lovecraft. It certainly reads like one of his stories and he obviously took a very great interest in it -- so great an interest, in fact, that it now stands not only as an incorporation into the Mythos, but as a major extension of it. According to Derleth's introduction to The Horror in the Museum, Frank Belknap Long also had a hand in it.

The interesting thing about this story is that it really does tie in very well with the religions of the ancient Indians who inhabited Mexico and Central America -- the Aztecs, Toltecs, Teotihuacanos, Zapotecs and Mayans -- just as Bishop and Lovecraft imply. Perhaps one or both of these authors had a very detailed knowledge of Mesoamerican religions, or perhaps the correlation is due mostly to chance; I do not know. Still, it is interesting to observe some of the correlations.

Francis T. Laney, in his long-out-of-print article, 'The Cthulhu Mythos: A Glossary,' equates Cthulhu with the Aztec god Huitzilopochtli. I have never been able to discover where he might have read anything that would lead him to make this correlation. Huitzilopochtli was the patron god of the Aztecs who led them to the 'promised land,' the island in the center of Lake Tenochtitlan where they founded a capital, much as Yahweh led the Hebrews to Canaan. He has nothing to do with water or 'Deep Ones' -- he seems primarily a war god -- again like Yahweh -- and he was born of a virgin-mother goddess. Perhaps the final letters of his name, 'chtli,' have something to do with Laney's correlation. At any rate, he would seem to be more likely one of the spawn of Yog-Sothoth, who is know to beget his progeny on mankind ..

But in 'The Mound' we read that the humans who occupy blue-litten K'n-yan, which land lies somewhere far within the earth beneath the southwestern United States, carried on trade or contact of some sort with the surface Indians of centuries ago. The people of K'n-yan worshipped Yig and Cthulhu, and their images often occupied the same temple. Furthermore, it is definitely stated that Yig is the prototype of the great Mesoamerican god Quetzalcoatl, the 'feathered serpent.'

Now, the interesting thing is that there is a very important archaeological site in central Mexico where Quetzalcoatl was evidently worshipped alongside another god who bears some striking resemblances to Great Cthulhu. This site is Teotihuacan, a huge ancient city which was abandoned long before the Aztecs or even the Toltecs came to dominate central Mexico, and the god is the one that the Aztecs later came to call Tlaloc, the Rain God.

Teotihuacan, in the Aztec language, means 'place of the gods.' The pyramids there are so huge that the Aztecs evidently thought they had been reared by the gods in ancient times. The largest one is as big around at the base as the great pyramid of Khufu in Egypt. But the most interesting thing pertaining to this study is that one of the lesser pyramids, a famous one often called the 'Pyramid of Quetzalcoatl,' contains carvings along its sides of two deities, one of which is obviously a serpent and the other some strange being with perfectly round eyes and suggestions of tentacles around his mouth. These deities are supposed to represent the prototypes of the later Aztec divinities, Quetzalcoatl and Tlaloc. But one of the most amazing things about this pyramid-temple is that along its base, beneath the carvings of the two gods, are bas-reliefs depicting marine motifs -- and this despite the fact that Teotihuacan is several hundred miles from the sea. The designs are primarily of snails, scallops and other mollusks.

After the Teotihuacanos (whose city seems to have been mysteriously abandoned along with a great many others around 800 A.D.) the Toltecs dominated the central Mexican plateau. Their principal god was Quetzalcoatl, but they, too, worshipped Tlaloc. They depict him on their vases and urns as a more humanlike being than did the Teotihuacanos, but his eyes are still huge, round and expressionless and there are suggestions of tentacle-like appendages around his mouth. The Toltecs' capital city, strangely enough, is called 'Tula'!

Still later, in Aztec times, Tlaloc was worshipped atop the greatest pyramid in Tenochtitlan (Mexico City) alongside Huitzilopochtli rather than Quetzalcoatl, who now had a pyramid of his own. Quetzalcoatl came to be worshipped on circular, truncated pyramids, rather than those in the shape of a coiled serpent.

It was supposed by the Aztecs that there was not merely one 'great' Tlaloc, but many subservient ones as well, especially four who ruled over the four quarters of the earth. They were somehow considered to be associated with frogs -- a rather striking association considering some of Derleth's stories in which croaking frogs herald the coming of Cthulhu or his minions. Students of Aztec mythology suppose that the croaking frogs announce the advent of rain and that this is how batrachians were first associated with Tlaloc, the rain god. But HPL students know better, I'm sure. ..

When we consider other Mesoamerican cultures, the resemblances continue to hold: The Zapotec culture, well inland, depicts its rain-god, Cocijo, as fundamentally human, yet with a queerly long and tentacle-like proboscis and with huge earrings that resemble the round, staring eyes of Tlaloc; the Totonacs on the Gulf coast have temples to Quetzalcoatl in the truncated shape, roughly like a coiled serpent. But the really striking correlations occur when we study the coastal Mayas of the Yucatan Peninsula.

The Mayan rain god, the equivalent of the Aztec Tlaloc, is called Chac. He is depicted on the limestome-built temples of the region as a being possessing not only round, staring, expressionless eyes, but with a coiling, tentacle-like proboscis exhibiting suction disks on both sides! In the recently-excavated city of Dzibilchaltun there is actually a representation of Chac showing him with several long tentacles protruding from the side of his head -- tentacles with suction-disks.

In the long-abandoned city of Chichen-Itza, the Mayans used to sacrifice young men and maidens to Chac by throwing them into a deep well, or 'cenote,' which was sacred to the god. Yucatan is entirely a huge, flat plain of limestone, honeycombed with underground caverns winding off to the sea, and pockmarked with 'cenotes' or wells marking the collapsed roofs of water-filled caves. Chac was supposed to live at the bottom of the particular 'cenote' at Chichen-Itza. /download-inpage-professional-2009-free/. If the thing the Mayans actually worshipped was one of the squidlike minions of Cthulhu, it could have easily oozed in from the ocean via the underground waterways draining the limestone peninsula. ..

Another striking correlation: the Mayan word for the serpent-being was not Quetzalcoatl but 'Ik' or 'Ix' -- a word identical to 'Yig,' considering that the Mayans had no phonetical alphabet but rather a complex system of hieroglyphics!

Finally, returning to the Aztecs, there was an earth-god Tlaltechuthli, who was represented as a huge frog or toad. He is considered to be one of the older gods in Aztec mythology, antedating Quetzalcoatl and Tlaloc among others. Students of HPL who have read 'The Mound' will recall that the worship of Tsathoggua, the toad-god, preceded the worship of Yig and Cthulhu in blue-litten K'n-yan.

I could make some more correlations here, like equating Cthugha with Huehueteotl, the fire-god of the Aztecs, or Nyarlathotep with Tezcatlipoca, who is the God of Evil and takes many forms including that of a jaguar, or Hastur with Mictlantechutli, Lord of the Dead, whose association with the dios murcielago or bat-god seems similar to Hastur's rule over the bat-winged Byakhee. But I won't detail all these associations; I think the reader can see the technique I am using. It is probably the technique theologians everywhere have always used: first establish your conclusions and then correlate them with your data.

Did HPL or Zealia Bishop deliberately incorporate elements of central American myth into the structure of the lore of Cthulhu? I think it quite possible. Perhaps someone can document this more fully some day.

Send your comments to Nightscapes

There is also information on the modern states of the region including revolutionary Mexico and Banana Republics like Honduras, and the histories of the most important figures in the study of these ancient peoples. Brian Appleton has written articles on the ancient weapons of the Mesoamericans, as well as cataloging the deities and monsters of local mythology. Besides his exquisitely bloodcurdling illustrations, Blair Reynolds has also contributed an article on Maya calendrics, which should be of interest to everyone as the winter solstice of 2012 continues to approach.
Covering another 120 pages, the four independent scenarios do not form a cohesive campaign, but as all of the scenarios require the same skill set (experts in Mesoamerican archeology) from player characters, a Keeper could easily run all four of the scenarios in sequence.
'The Well of Sacrifice', by John H. Crowe III, is a bit of a legend around Pagan Publishing. Playtested again and again, the scenario gained the nick-name 'The Boneyard.' Let's hope your players fair better than we did.
'The Mehirs in the Grotto', by Brian Appleton, brings the Investigators to central Mexico, where an ancient evil is being unearthed by modern progress.
'The Heretics', by John H. Crowe III, places the Investigators between two warring groups of Mythos cultists, with very few good options open to them.
'The Temple of the Toad', by Brian Appleton, provides a grim epiloge to a classic tale of the Cthulhu Mythos, one that could easily consume the members of an expedition into the jungles of Honduras.
And speaking of unlucky, foolish and otherwise doomed Investigators, keep an eye out for a new feature in The Mysteries of Mesoamerica that will become a standard feature in upcoming Pagan Publishing products: The P.C. R.I.P. which chronicles those stalwart adventurers who failed one too many die rolls or ignored the advice of fellow players. Each R.I.P. includes the player character's name, profession, date of death and any notable last words. Or at least the stupid thing they said just before they got themselves killed. 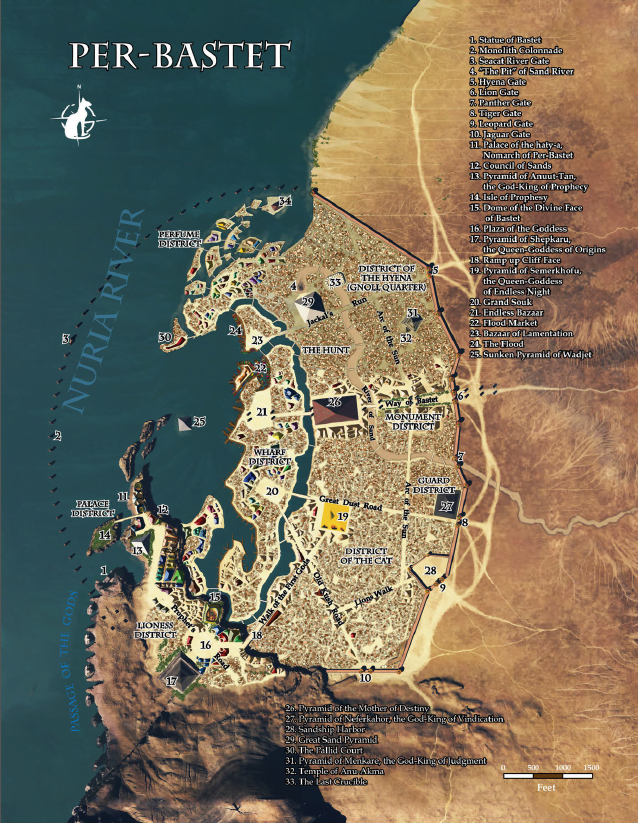